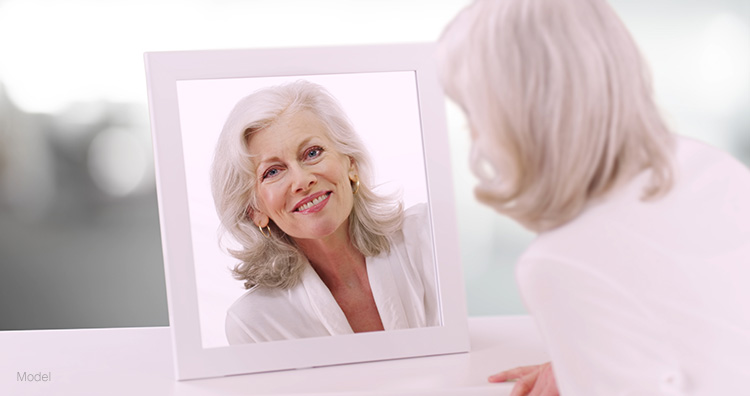 Facial aging develops on every individual, no matter how well they maintain their skin.

These signs of aging can occur on any part of the face, but they tend to deepen on the neck and jawline (jowls).

The development of these can be frustrating and disheartening since the face is so visible.

While facelift surgery addresses these signs of aging, many patients desire something less invasive.

This lift is the culmination of Dr. David’s years of experience performing over 1000 facelifts and perfecting his approach.

How Does the La Jolla Lift Differ From a Traditional Mini Facelift?

A mini facelift, or a short-scar facelift, is traditionally performed for patients who are looking to correct minor sagging skin and jowls in the lower sections of the face.

This procedure uses shorter incisions than a traditional facelift, but typically only tightens the superficial layers of skin and tissue. The mini facelift is very effective at treating the beginning signs of aging.

This technique is often reserved for younger patients or those who use this as a follow-up to a previous facelift.

Many patients desire this procedure because it has a quicker recovery and does not require the use of general anesthesia.

Unfortunately, the mini facelift does have some limitations.

Mainly, the traditional mini facelift does not address the neck, and an aging neck is one of the most common concerns for individuals interested in facial cosmetic enhancement.

The La Jolla Lift is a derivative of the traditional mini-lift, but, unlike the original, this technique emphasizes the tightening of the neck as well. Patients who are concerned with laxity in their neck—whether it be sagging skin beneath the chin or vertical banding—can benefit from this procedure.

The La Jolla Lift addresses laxity on the mid-face (cheeks), jawline, and neck.

This deeper layer is the same tissue that is tightened with a full facelift, and this allows the results of a La Jolla Lift to be more comprehensive.

Dr. David performs a vertical lift, restoring the cheeks, jawline, and neck to their natural state and reversing signs of aging.

As the cheeks are lifted, the smile lines soften and the drooping of the corners of the mouth also improves. Patients achieve world-class, often life-changing results, without a need for general anesthesia.

This procedure provides the safe and natural rejuvenation of the cheeks, jawline, and neck.

How Does the La Jolla Lift Differ from a Traditional Facelift?

During a traditional facelift, Dr. David addresses the entire face.  This includes the areas around and above the eyes.

This usually involves an incision in the temple regions and mid-scalp to lift the entire forehead.

The traditional facelift is entirely comprehensive, but many patients do not require that extent of facial correction.

The La Jolla Lift is better-suited for patients who are dealing with aging on the jowls and neck and want to restore youthful contours without lifting the brows- all while avoiding general anesthesia.

This less-invasive option allows patients to achieve much of the same result but with less downtime and expense.

Most patients who undergo a La Jolla Lift are between the ages of 45 and 65.

How Do These Factors Affect Cost?

The final cost of your La Jolla Lift depends on the amount of lower face and neck laxity, as well as the cost for the anesthesia, facility, and post-surgical dressings.

Even with the combination of these, the final cost of your La Jolla Lift will still be approximately half of the cost of a full facelift.

Because the recovery period is shorter for a La Jolla Lift than for a traditional lift, patients will return to work sooner. This aspect affects cost since patients need to take less time off of work.

Patients resume all normal activities within 10 days to two weeks.

What Are the Benefits of a La Jolla Lift?

The La Jolla Lift gives the results of a traditional facelift for the cheeks, jawline, and neck without a need for general anesthesia.

Since this surgery is performed under gentle twilight sedation and not general anesthesia—as a traditional facelift is—it is widely considered to be a safer procedure with a more comfortable recovery.

Because the La Jolla Lift manipulates the deep-plane tissue, the results will never appear pulled or overly stretched. These “tell-tale” signs of a poor facelift occur when inappropriate techniques are used.

Incisions are well hidden, and the results are natural. La Jolla Lift patients can enjoy their results and their tighter skin for 10 to 15 years on average.

If you are interested in learning more about Dr. David’s La Jolla Lift in San Diego, contact Roy David MD Plastic Surgery And Medical Spa by calling (858) 997-0085 or by filling out our online contact form.

Sign up to receive our monthly newsletter and get your pass to the hottest tips, trends & monthly specials.